YA Book Review--Consequences by Darlene McGarrity

Second chances lead to new beginnings... sometimes, they lead to murder. Seventeen-year-old Rose Jackson is a self-righteous, nature-loving truth seeker whose rocky relationship with her mother, Doris Murphy, is tested after Rose is court ordered to a youth house.
With six months left before she goes in front of a judge for potential release, her patience is tested between an in-house bully, her neglectful mother, and an inappropriate therapist.
Fed up, Rose runs away before her court date and settles in a town she randomly chose on a map. Misinterpretation ensues as she falls for a town local, goes head to head with a biker gang, and the unthinkable happens.
Can Rose succeed in finding the freedom she craves or will her determination cost her everything?

Rose Jackson has got a big problem, being institutionalized in a youth house, filled with chaos, nasty counselors and a depraved therapist. She's worse off than inmate, and her drug-addicted mother had everything to do with her landing in the hellhole. Although she's just under eighteen, Rose is not going to wait a minute longer and manages a covert escape into the freedom she desperately craves, otherwise she'll lose her sanity.

She hikes miles and miles with sparse belongings and little money to land in a strange little town that she's picked on a map. She finds out real quick she's a Philly city girl trapped in a wayward town of drunks, misfits and bikers. She meets up with a biker prospect, Tucker, who takes her under his wing.  It just so happens that when Tucker gets his colors, he has to surrender a gift to the biker boys. He won't have--she won't have it--and they hike and ride for their lives. Meanwhile, her mother, who has sobered up and kicked drugs is desperate to find her daughter who escaped the youth house without her knowledge.

Consequences is a thriller, a coming of age story and a slow burn romance all rolled up into one. It's a relentless chase and survival story, with harrowing scenes and tragedy. Rose is steadfast and courageous, fighting back at every turn. You just have to root for her, and find out how she's going to get out of her next jam.

This was wonderfully written, the author using all five senses to describe and paint stunning visuals. The characters are diverse and well drawn. This was a page-turner and had some abrupt detours and spins. The young adult voice was captured very naturally. I would recommend this to teens who love frantic adventure, and adults who appreciate grownup themes. I think Ms Darlene A. McGarrity has got a future in the YA category. This tome begs a sequel. 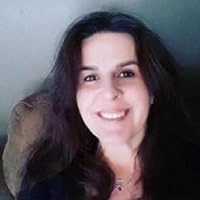 Darlene was born and raised in Philadelphia but now resides in Bucks County, PA. Nature fuels her bones along with the love of a rescued black cat, wonderful husband, and strong coffee. She has been writing seriously since 2006, despite starting back in 1997. Some of her favorite authors include Stephen King, Kurt Vonnegut, Ann Rule, Edgar Allan Poe, and Chuck Wendig.

She uses music to adjust any mood for writing, for driving, and for life.

Nature is her church.